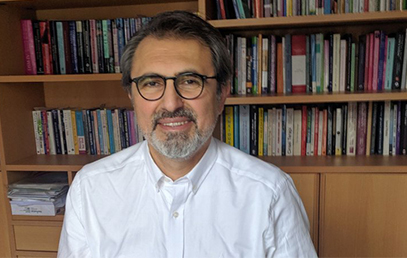 Dr. Türkçapar graduated from Hacettepe University School of Medicine in 1990 and completed residency medical training in Psychiatry at Hacettepe University in 1995. After his residency, in 1997, he had cognitive psychotherapy training at the Beck Institute for Cognitive Therapy and Research in the United States in the field of Cognitive Behavioral Psychotherapies. After Rational Emotive Behaviour Therapy (REBT) training at New York Ellis Institute, he was awarded Primary Certificate in 1999 and Advance Certificate in 2008.

He became an Associate Professor in 2000 and a Professor of Psychiatry in 2012. Additionally, Dr. Türkçapar received MA and PhD degrees in Social Anthropology.

Dr. Türkçapar has published three books, “Bilişsel Terapi Temel İlkeler ve Uygulama” (2007) and “Klinik Uygulamada Bilişsel Terapi: Depresyon” (2009), “Fark Et Düşün Hisset Yaşa” (2019), and over 100 articles in the field of cognitive behavioral therapy. Since 1999, he has conducted training activities for cognitive behavioral therapy professionals in various centers and scientific meetings. He is also the founding editor of the Journal of Cognitive Behavioral Psychotherapy and Research, which includes scientific studies in the same field.

He was the chief of the psychiatric clinic of Ankara Dışkapı Yıldırım Beyazıt Training Research Hospital between 2005 and 2012 and the founding chief of the psychiatric clinic of Etlik İhtisas Hospital between 2008 and 2011. Dr. Türkçapar is currently the President of the Association of Cognitive Behavioral Psychotherapies. Between 2012 and 2019 he worked at the Department of Psychology, Hasan Kalyoncu University. As of 2019, Dr. Türkçapar is a Full Professor in Psychology at Ankara Social Sciences University.